Home / Latest Updates / 2019: APGA Will Suffer For Injustice Against Me, Says Bianca Ojukwu 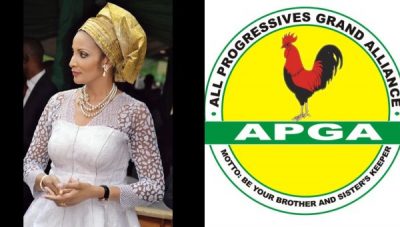 late Biafran warlord, Odumegwu Ojukwu ‘s wife,Bianca Ojukwu, reportedly said yesterday in a statement she personally signed that the All Progressives Grand Alliance, APGA, is facing a catastrophe that would leave terrible repercussions on the party going into the 2019 general elections.

She declared that APGA will suffer the repercussions of conducting skewed primaries against her and other founding members of the party.

Ojukwu’s widow, who recounted her ordeal at the APGA senatorial primary in the Anambra South district where she lost to Mr Nicholas Ukachukwu, appealed to APGA members not to quit the party, as it was not the solution to the problem.

“As a member of this party’s board of trustees, I am deeply concerned that mercenaries would appear to have hijacked the operations of our party machinery. APGA is today facing an existential threat and the overall image of our party is in tatters.

“This will certainly have serious repercussions going into the main elections.

“I would like to use this opportunity to reach out to all aggrieved members and aspirants who, like myself, have suffered grave injustices under a system which had an abiding responsibility to its members to create an enabling electoral environment,” her statement read in part.