Home / Latest Updates / 2019 Elections: Buhari Has Been Complaining For The Past 3 Years, Says Fayose 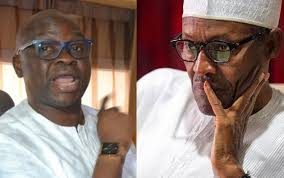 Immediate former Governor of Ekiti State, Ayodele Fayose, who was recently a guest at the EFCC office and still very much in court as charged, has implored President Buhari to stop complaining about his predecessor, but move the country forward. He also urged the PDP to do everything in their power to attain the first office ion 2019.
A statement on Thursday by his media aide, Lere Olayinka, reads: “When he was seeking the votes of Nigerians, he never said he was coming to complain. Rather, he promised to fix what he claimed to have identified as the problems.

It is no longer funny that a President who assumed office three and a half years ago is still complaining about how he met the country, instead of Nigerians having feelings of how well he has solved the problems he claimed that he had the capacity to solve.

“He should stop singing the same song of lamentation that he has been singing since 2015 and learn from his colleague in Ghana, who hit the ground running immediately he assumed office. Only a leader who lacks competence and is challenged by knowledge and exposure will blame his predecessors for over three years.

“Nigerians of mostly below forty years who voted for the President in 2015, did so because they never experienced him as a Military Head of State. Now that they have seen that he does not have the required capacity to govern a country like Nigeria, they are eager to vote him out.”

The former Governor charged leaders of the Peoples Democratic Party (PDP) to “put everything into the 2019 elections, so as to rescue Nigerians from the present state of anguish occasioned by the directionless All Progressives Congress (APC) government”.

He continued: “Today, Nigeria has become the ‘Poverty Capital’ of the world. God forbid, a Buhari’s second term will turn Nigeria to a republic of poverty where people will be running to other neighboring countries to feed. PDP must therefore work very hard to save the country from going down completely.”