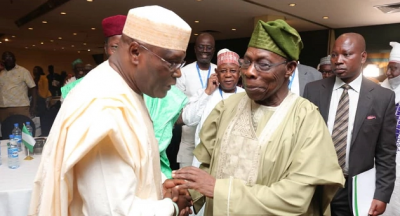 Former President Olusegun Obasanjo and the presidential candidate of the Peoples Democratic Party, Atiku Abubakar, met in Abuja on Tuesday, The Punch learnt last night.The meeting was also attended by the National Chairman of the PDP, Prince Uche Secondus, amongst a few others who were said to have been carefully selected for the meeting.

Sources close to the meeting told Punch that the meeting was based on the strategies that would enable  Atiku and the PDP emerge winners in the general elections.

It was also gathered that the meeting reviewed the ongoing zonal campaigns of the party, which was said to be a precursor for the state-by-state campaign that would follow.

It was also gathered that the former president used the opportunity of the meeting to settle the rift between Atiku and a former Governor of Adamawa State, Admiral Murtala Nyako (retd.).