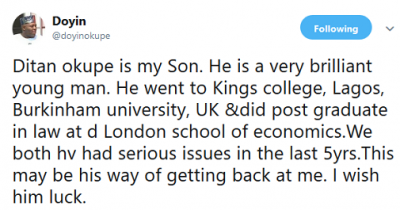 Doyin Okupe, a chieftain of the Peoples Democratic Party (PDP) who is also campaigning vigorously for Atiku Abubakar has explained why his son joined ‘the enemies’ camp — APC.While speaking on why his first son, Ditan joined the Buhari’s campaign team, Okupe says he could be because of their differences. He said;

”Ditan okupe is my Son. He is a very brilliant young man. He went to Kings college, Lagos, Burkinham university, UK &did post graduate in law at d London school of economics.We both hv had serious issues in the last 5yrs.This may be his way of getting back at me. I wish him luck.”