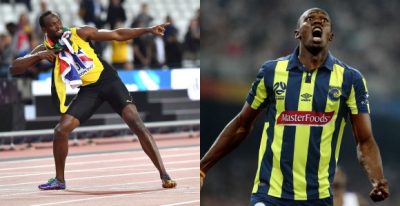 Usain Bolt is a Jamaican sprinter and world record holder, widely considered to be the greatest sprinter of all time and he is an eight-time Olympic gold medalist. He is also the most successful athlete of the World Championships.

“The deal between the Mariners and Usain Bolt, in principle, has been agreed, subject to a couple of benchmarks, namely a trial and, of course, some marquee funds support from the FFA [Australian Football Federation],” agent Tony Rallis said in a radio interview.

“They understand that he has to go through six weeks of a trial.”

Since retiring last summer, the 31-year-old Jamaican has trained alongside club teams in South Africa, Jamaica and Norway, plus had a much-publicized visit with Borussia Dortmund in March. Bolt and Dortmund share an apparel sponsor in Puma.

“This bloke’s an ambitious athlete,” Rallis said. “You know, the A-League needed a hero, and we got Superman. … If he’s competitive, he will lift our A-League profile, he will create dreams of young people and he will give the A-League a profile no amount of money can buy,”