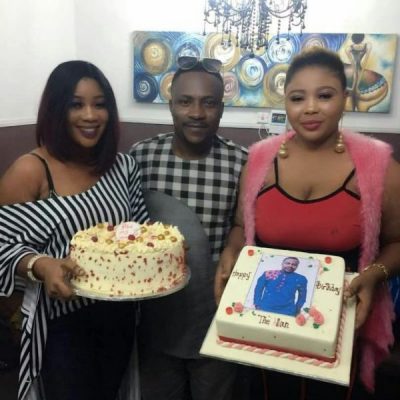 About a week ago, popular filmmaker, Segun Ogungbe, celebrated his birthday and the news made rounds. However, the story was not about his birthday but his marital life.

The online reports claimed that the popular Yoruba actor and film director celebrated his birthday with his two wives, Omowunmi and Atinuke, children and friends. His second wife, Omowunmi Ajiboye threw a surprise birthday party for him which had in attendance several Nollywood stars.It was reported that Segun who is the nephew of the late actor and filmmaker, Akin Ogungbe, who reportedly had 20 wives and 50 children, decided to follow in his uncle’s footsteps after he reportedly impregnated his wife’s ‘best friend’, Omowunmi, who in 2015 was an upcoming actress, training at Segun’s film school.

According to the report, she later gave birth to a baby boy and the pair had a ceremony to seal their union, an action that caused a huge problem in his marriage. Two years down the line and it seems the rivalry is over and the wives are back to being ‘friends’ again.

Reacting to the claims online, the movie director told Saturday Beats that there was no iota of truth in the story.

He said, “I read the stories online and there were different versions but the truth is that I did not impregnate my wife’s best friend. It is all rumour. The lady in question was not even part of my theatre group; neither was she a part of my drama school. She had been my girlfriend for a very long time even before we finally got married.

“What actually happened was that there was a lady who wanted to marry me a long time while ago and I made her realise that as of that time I could not have two wives. She is not into entertainment at all and I would not want to mention names.

Eventually, I got together with my second wife and when she got pregnant and we eventually got married, the lady was very mad at me. She was the one that went on her Facebook wall to spread the false news that I got my first wife’s best friend pregnant.

She was the one that framed me simply because I did not want to marry her back then. Sadly, people are quick to believe news like this without confirming the truth. No blogger reached out to me before they picked the news from her Facebook page and that is the rumour being peddled against me till date. No one would believe the truth till they hear from me but no one reached out to me and how many people would I begin to explain what really transpired.”

When asked why he kept quiet or refused to sue the said lady, the filmmaker simply said that he felt his silence would be golden. “I did not respond to the news initially because I believe everyone has the freedom of speech, more so, I thought that if I had spoken out, it would prolong the matter and I just wanted it to end. I did not do anything bad; she was the one that framed me in such a way that I would look bad in the public eyes. I also did not know who to reach out to for them to tell my side of the story and you know how this industry is. If I say a word to the wrong person, they could easily twist my words and make matters worse. That is why I decided to keep quiet. My wives did not know each other before I got married,” he said.

He said he has a very peaceful household despite online rumours that his wives had once been at loggerheads. “I have a peaceful household. God has blessed me with wives that understand each other. It is only God that can help a man have a peaceful home. However, for those who think that I would have about 20 wives like my uncle; all I have to say is that they should mind their business,” Ogunbe said