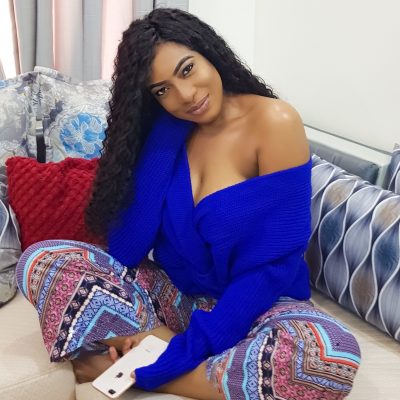 Ike, who recently became an author, told Sunday Scoop that she was aware the negativity spreading all over the Internet, especially on Instagram, had the ability to spoil one’s day.

“Instagram can spoil your day if you are not careful or strong. There is so much negativity in the world right now; so, you have to guard yourself with prayers. There is a need to start your day in a positive light and when you pray, your day has started positively,” she added.

Speaking on why she wrote a book on her failed marriage and father’s rejection, she said God deliberately made everyone to go through certain things in life so that one could learn and share. The actress said, “If you go through a lot of things and you are not willing to share, you’ve not achieved the purpose of God for your life. People will always have their perspectives about life and they talk about the dead too. I have gone through the phase of being scared or afraid of being judged by the public. I am learning every day to focus on myself; I cannot control anyone’s thoughts. I was rejected from birth by my father and I addressed it in my new book.”

In the said book, Ike also stressed the role her mother played in her life before she died. “Before my mother died three years ago, I had a discussion with her in the hospital. She wanted to know when I would publish my book; she was once an author too. I told her I was scared and she told me to tell the truth,” said the actress.

“When she died, I lost myself for two years and I did a lot of therapy to get myself together. I was so attached to my mother and I didn’t want to disappoint her because she gave me her last word. My mother’s death made me understand that life is too short and we don’t have much time on earth. We don’t know how tomorrow would be; so, the earlier we started achieving our set goals, the better for us. It took me seven years to write my book because I was afraid to share some private things about me at some point. ”