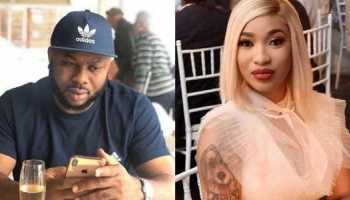 Olakunle Churchillhas appealed to his followers to respect the mother of his child, Tonto Dikeh after he was dragged into an exchange with a follower over a new photo.

This is coming afterTonto Dikeh’soutburst on Instagram over the weekend. The actress had her called her ex-husband, Olakunle Churchilla one minute man. Tonto Dikehalso described her ex-husband as a fraudster ‘yahoo boy’.

Tonto Dikeh blasts her ex-husband, Churchill Olakunle and his brother after cautioning the Instagram user who asked if the mother of his son, King, was mad.

“MANIPULATION 101, This is what they do when you speaking sooooo much truth and they want you to keep quiet… BITCH DONT SUPPORT ME, YOU CAN SNAKE ON THESE IGNORANT FOOLS BUT DUDE YOU KNOW ME TOO WELL JUST LIKE I DO YOU…JUST STAY BLAMK TO ANYTHING THAT CONCERNS ME AND AS LONG AS YOUR TONTO WANNABE HOES KEEP OPENING THEIR FAKE PAGES TO TROLL ME…YOUR NECKS ON THE CHOPPING BOARD BITCH..

She further took to her Instastory to spill dirts about her ex-husband.

“THESE SONS OF A GARDNER (Kunle and gwingz) DONT KNOW THAT RIGHT NOW RESPECT ISN’T MINE TO GIVE, LOST ALL THE RESPECT OF THE FAMILY SO NOW ITS PURE TOTAL DISRESPECT IF I FEEL DISRESPECTED BY ANYONE OF YOU IN THE LITTLEST WAY POSSIBLE… DONT PLAY.

“Geared up to empower 7000 youths, oga you never empower your mother or sisters that need surgery on their faces, ooo what I’m I talking empower your sin.. FAKE LIFE, FAKENESS EVERY, FAKE POT OF STEW…

“Why you never begin empower nah, oo wait Maga has to pay first.. dude don’t worry this isn’t about cs which you can’t afford in the 1st place… Only person you can empower is your lies, DEAD CATFISH.

“Man who has been hiding becos money don finish, now I give you small heat you day fake ass company bullshit.. Just put your children name under the 7000 to be empowered.. LIAR LIAR you thought the yahoo money wld not finish?? It has na and we are WAITING for the next lies.

“ALL THESE ADVICERS ON MY DM, PLS YOU ALL JUST STICK TO JUST BEGGING ME MONEY.. THIS ISN’T THE RIGHT TIME.