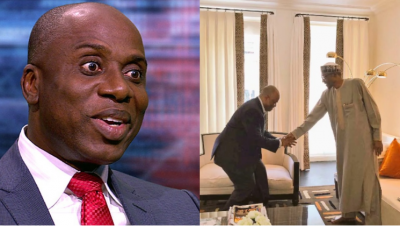 Rotimi Amaechi,the Minister of Transportation, has confirmed that the Minority Leader of the Senate, Godswill Akpabio, will soon dump the Peoples Democratic Party, PDP, for the All Progressives Congress, APC.

According to Dailypost,Amaechi ❤ who is the Director-General of President Muhammed Buhari’s campaign organization, made the confirmation in a chat with Sahara Reporters. “I saw him and he confirmed but I don’t know about the date,” the report quoted Amaechi as saying. Akpabio was former two-term governor of Akwa Ibom State.

President Buhari’s Special Assistant on Prosecution, Okoi Obono-Obla, had yesterday disclosed in a Facebook post that Akpabio will be received into APC on Thursday by the Acting President Yemi Osinbajo and other top leaders of the party at a rally in Ikot Ekpene, Akwa Ibom state.

*How come his dumping is taking time and generating dust?