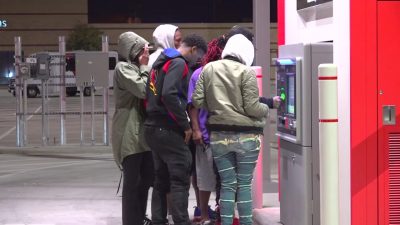 An ATM in the Houston area has been shut down and was temporarily guarded by law officers after mistakenly dispensing $100 bills instead of $10s and word of the glitch got out on social media.
Some Harris County sheriff’s deputies protected the outdoor ATM after Sunday night’s incident and notified Bank of America.

A bank statement Monday says a vendor incorrectly loaded $100 bills in place of $10 bills. Bank of America also says customers will be able to keep the additional dispensed money.

Officials with North Carolina-based Bank of America didn’t say how much cash was wrongly dispensed.

The company issued the following statement: “This was an incident at a single ATM in Houston caused when a vendor incorrectly loaded $100 bills in place of $10 bills. We have resolved the matter. Customers will be able to keep the additional money dispensed.”