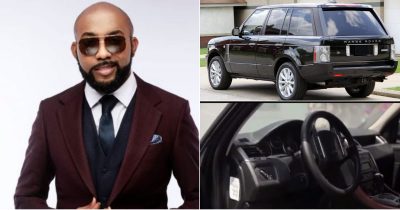 Nigerian singer, actor and politician, Mr Banky W, has lived up to his promise to auction his 2008 Range Rover SUV after the car was finally sold in a bidding ceremony today in Lagos.

Recall that sometime in July, two ladies filmed and trolled the singer online for using an old model Range Rover after they spotted EME boss and his wife, Adesua Etomi, leaving a grocery store. Both ladies called out the celebrity couple for living a ‘fake life’ but couldn’t afford a befitting car for their celebrity status.

But Banky who through an open letter titled ‘Dear Stalker’, replied the ladies saying he didn’t see the need to own more than one car and that the car in question was an important part of Nigeria’s entertainment history as it has been used to convey some of the industry’s most prominent figures. Banky further said that the car was actually up for sale to the highest bidder and that the proceeds will go to charity.

‘I had decided last month that I’d sell it, and whatever I got for it, I’d hand over to the “Vocational School for the Blind” in Oshodi and the “Pink Oak Cancer Trust Fund”. My Aunt volunteers at the school, and she reminded me that they were still trying to raise some money to care for their students, so I came up with a plan. I told her that I’d give my followers the background history of my old car, and get all my celebrity friends who’d sat in it at some point or another to autograph it, and then put it up for an online auction. I figured that since I didn’t need the money from the sale to buy a new one, we could just auction it off and hopefully raise a decent enough amount of money to give back to those in need,’ Banky said.

As promised, Banky W has finally auctioned his 2008 Range Rover. Indeed, he's a man of his words.