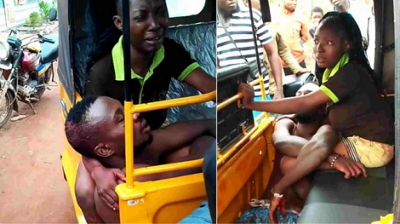 A teacher, Abimbola Olamide, has been arrested by policemen from the Lagos State Police Command for allegedly stabbing her husband, Dare Akinbobola, to death at their residence in the Ikorodu area of Lagos State.

Punch Metro gathered that there was an argument between the couple on Wednesday, which degenerated into a fight.In the ensuing brawl, Olamide was said to have stabbed her 28-year-old husband with a knife, killing him in the process.

In a video clip of her confessional statement, which went viral on Thursday, the mother of two said she acted in self defence.

While speaking in Yoruba, she said, “I did not kill my husband intentionally. He was beating me and while hitting me, he broke several plates on my head. He had battered me many times in the past, but whenever he beat me, I usually run out of the house.

“But this time around, he locked the door to prevent me from escaping, pinned me down and battered me. I was helpless.

“I picked up a knife on the ground; my intention was to use the knife to scare him away. So, I held on to the knife, but he didn’t leave me alone. I mistakenly stabbed him; I couldn’t have killed my husband intentionally.

“My family already told me to leave him, but I did not because he was the husband of my youth and father of my two children. He usually beat me; you can ask around, everybody knows. But I have just been enduring it.”

Efforts by a Punch correspondent to contact the family and neighbours of the deceased proved abortive.

Punch Metro learnt that the case was reported to the police at the Igbogbo station from where the suspect was transferred to the Homicide Unit of the State Criminal Investigation and Intelligence Department, Yaba.

He said, “It is another case of spousal killing in which the suspect stabbed her husband in the neck and the man bled to death.

“The corpse has been recovered for autopsy. Meanwhile, the suspect has been arrested and taken to the SCIID, Yaba, for further investigation.”