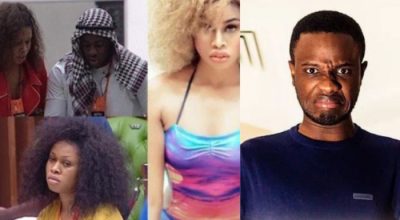 Days after two Big Brother Naija stars, Ifunnada and Deeone attacked each other on social media, another dispute broke out but this time, it was between Deeone and another former housemate, Princess.

Quarrel broke out on Instagram after Deeone the comedian, cracked a joke in reply to a video advert Princess did for his upcoming comedy show where she jokingly told Deeone to come and “pay homage” to her.

The comedian in replying her, took to his Instagram page, and wrote:

This infuriated Princess, who didn’t like the “runs geh” part of the joke. She swiftly slammed the comedian, calling him a ‘very ‘ mad man and further threatened to mess him up.

However in another post, Deeone threatened the sponsors of the show, Payporte. See what he wrote about the company which was liked by his fellow ex-housemates, Rico, Leo Dasilva and Bitto.