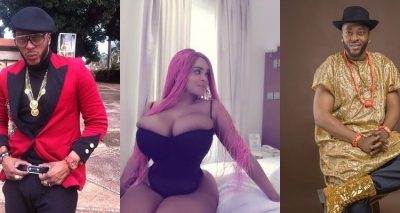 Nolllywood actor, Benson Okonkwo, who’s single and searching, said there’s only one woman who has captured his heart – Cossy Ojiakor!

The actor confessed to Potpourri in a private chat that of all the women in Nollywood, if he has to settle down with any woman, it would definitely be the Nollywood’s boobs blazing Nutty Queen, Cossy Ojiakor.

“I have many girlfriends but I am taking my time to settle down. When I find the right woman I will settle down. I know I’m not getting any younger but age is nothing but a number.

“Marriage is a full time thing and you have to be very cautious before you dabble into it or you would be making the biggest mistake of your life,” he mused, when asked why he has not yet settled down.  When it comes to women, there are always complications.

“I don’t want to marry now and divorce soon after. But very soon something will happen. I need someone controversial; someone who will understand me, I mean the real Benson inside. If I’m to pick a Nollywood actress I can marry I will pick Cossy Ojiakor.

“She’s my ideal woman. Forget the Genevieves, the Angela Okories, Rita Dominics or anyone, the woman for me in Nollywood is Cossy Ojiakor. I believe she’s a kind of woman who can understand me,” he quipped Benson Okonwo who told Potpourri he doesn’t want to be controversial anymore, started his journey in Nollywood with controversies on his wings”.

He has once been accused of being gay following his exploits in the film that brought him to public reckoning ‘One Dollar’. He also ran into muddy waters of criticism after publicly announcing that Nollywood should embrace pornography to make sensual scenes more believable. Nonetheless, Benson Okonkwo has come a long way and he is a proud recipient of many awards, both as an actor and a model.

After hearing his huge confession the actor made, Cossy reacted.

Cossy Ojiakor Like a woman to whom the big question has been popped, purred, “Wow,” and dropped the call, perhaps, to take in the full weight of the onslaught.

When she returned, she was all cozy Cossy, amiable, and almost gleeful, like a girl who has truly found love.

He is so cute and will make very lovely babies,” she said beaming with smiles. She said she had paused to respond because she wanted to find out from Benson if it was true he had said what he said and to prove she actually asked him, she sent screen shot of their chat.

Though most of it wasn’t discernible but what was clear is that this could be a start of some romance.

In the chat history, Benson said , “my everyday crush”, addressing Cossy, and she answered with emojis of smiles and kisses Then, he said, “Yes, that’s what I said, no time to check time”.

You have got a beautiful heart and always happy, that’s why I like you,” and yet again Cossy replied with an emoji of a kiss, adding, “Kisses and hugs” If this is not a start of a romance, then what is?