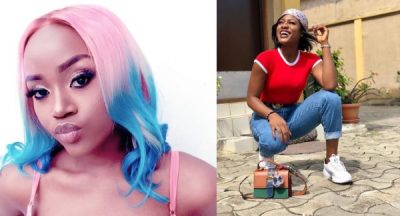 In the video posted by stylist, Swanky Jerry, Chioma reportedly turned with a frown towards Alex who was filming her.

This fueled speculations that she does not like Alex who happened to be her close friend,Cee-C’s arch rival in Big Brother Naija house.

However, Chioma took to the comment section of the video to dispel those insinuations.

Can’t some people just be positive for once? She wrote Even If I wasn’t smiling,it wasn’t even intentional. Alex is a sweet girl and I love her spirit..She is always happy. Relax y’all..She concluded.

Here is the video below;

@thechefchi x @alex_unusual both rocking the luxury BOB series collection…….. this pink and blue is sold out already 🔥🔥🔥🔥 #swankyjerry x #veebeez BTS We have the most exciting colors yo can't wait to show you all .