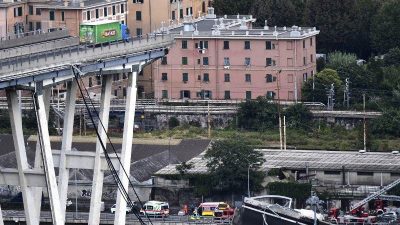 A frantic search was underway Wednesday for survivors under the shattered remains of a motorway bridge in Genoa as the death toll rose to 35 and investigators probed what caused the catastrophic collapse.
A vast span of the Morandi bridge caved in during a heavy rainstorm in the northern port city on Tuesday, sending about 35 cars and several trucks plunging 45 metres (150 feet) onto the railway tracks below.

“Unfortunately the toll has risen to 35 in the Genoa tragedy, including three children aged eight, 12 and 13 years old,” Interior Minister Matteo Salvini said, praising firefighters who worked tirelessly through the night. Our prayers are with them!