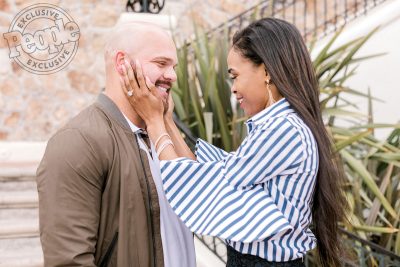 Michelle and Chad are currently filming their reality show for OWN entitled Chad Loves Michelle. And the couple has decided to postpone their engagement indefinitely. The idea for an indefinite proposal first came from Chad – but Michelle is on board with the decision. In a clip from the reality show this week, Chad admits that he’s not ready to set a wedding date. We’re told that since this episode was filmed – the pair have decided to “postpone” their engagement indefinitely.

But the couple still is together romantically, and say they are “open” to marriage if everything works out.

Chad explains in the below clip, “At this point I’m not confident to set a date. I mean she just got out of the hospital. I need to be able to be in a position where I know that I can fully and competently love her the way that she deserves to be loved.”

Now this isn’t the first time the couple has put things on hold. Just weeks after Johnson — a pastor whom Williams met last spring at a spiritual retreat — popped the question in March, the former Destiny’s Child singer broke off the engagement. Three months later, she was hospitalized and subsequently entered a treatment facility for severe depression.