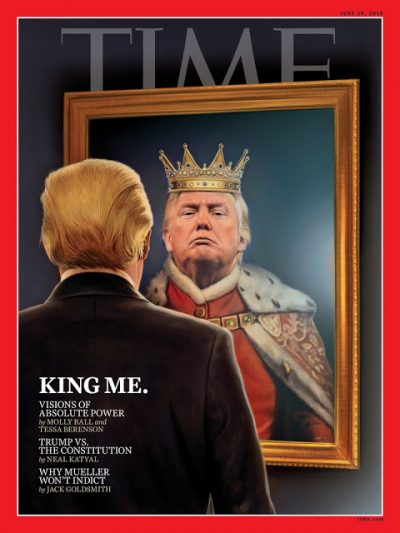 For the cover of TIME Magazine‘s June issue, U.S President Donald Trump is painted for the fourth time by brooklyn-based artist Tim O’Brien, staring at his reflection in a jeweled crown and robe.

Speaking on the cover, O’Brien said:This portrait of Trump gazing into a mirror and seeing a king gets to the heart of how he and his legal team have approached this past week and the past 500 days, actually.

Besides the usual challenge of the short deadline and making the image work, whether or not to have him looking at himself or looking at us was the thing I pondered most. His eye contact with each reader, each American fits the situation best.

According to TIME, the cover is meant to address the political attacks launched by the White House on Robert Mueller, who is the special counsel appointed to investigate potential meddling by Russia in the 2016 presidential election.