Home / Latest Updates / Evans Laments In Court ‘Why Do You People Want To Kill Me?’ 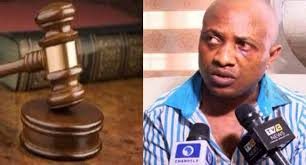 Suspected kidnap kingpin Chukwudumeme Onwuamadike aka Evans has complained in court that he’s being maltreated and beaten in the prison where he is held, Punch reports.

Evans had reportedly refused to appear in court, complaining that he was unwell.

He had, according to Punch, remained in the prison van in protest and brought before the court by warders on the order of the judge.

He had immediately complained to the judge, barefoot and in shorts and a stained green tee, saying:

I have an explanation to make. Since I have been in the maximum prison, they have been maltreating me; no visit, they don’t feed me well, I have eye problem and I cannot see far.

An unnamed prison official however reportedly denied his claim, saying the suspect has been treated just like the other inmates. The official said:

We have been treating him very well; he is well fed and people have been visiting him. A doctor has been checking him; the doctor came to check him yesterday (Sunday) and even this morning before coming to court, because he was saying he can’t be in court, that he is not feeling fine.

But when the doctor checked him yesterday (Sunday) and this morning, the doctor said he was healthy and that he saw no reason why he couldn’t be in court.

The judge, Justice Adedayo Akintoye, regardless, asked that the prison officials treat Evans as they do other inmates.

What have I done to you people? They have been beating me; no good food; I have been locked up in one place since August 30 last year; why are they taking my case personally? Let me face my trial alive, why do you people want to kill me?