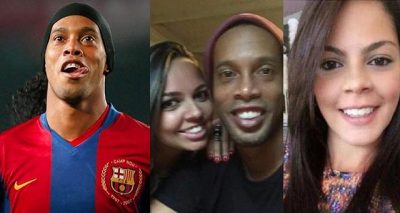 According to reports in Brazilian, football legend Ronaldinho Gaucho is set to marry two women at the same time. It is believed that Ronaldinho asked Priscilla Coelho and Beatriz Souza for their hands in marriage in January last year, according to Brazilian columnist Leo Dias via The Mirror.

The 38-year-old, who actually announced his retirement from football in January, gave both women engagement rings. It is reported that the two women have been, and are currently, living “harmoniously” with the legend in his mansion in Rio de Janeiro.

Brazilian columnist Leo Dias also claims that both women receive a monthly allowance of $5,000 from Ronaldinho to ‘spend as they please.’ The wedding is scheduledto hold in Santa Monica in condominium in Rio.