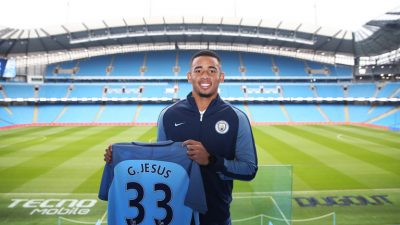 The 21-year-old joined Manchester City from Palmeiras in January 2017 for £27m scoring seven goals in eleven appearances to announce his arrival in the EPL.

Gabriel Jesus has been rewarded with a new two-year contract extension that will keep him at the Club until 2023.

“I would like to thank the fans for the welcome and for how well they have treated me. I can say that it was the best decision I’ve made in my life to come to Manchester City because whilst I’m here I’m improving as a professional and as a person.

“Also thanks to the Club for being so organized and focused since I arrived. Pep had an important role in my signing, but also the Club.

City is a huge Club and it is getting bigger and bigger so I just want to say thanks for everything. I hope that I can keep making the fans happy.”