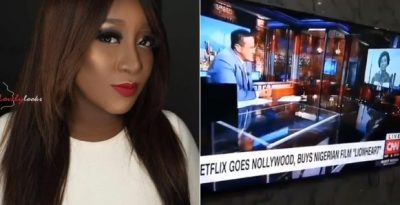 Nollywood actress, Ini Edo has taken time out of her busy schedule to celebrate her colleague, who she referred to as her sister, Genevieve Nnaji on her latest achievement.

Sharing a picture of Genevieve on her Instagram page, Ini Edo wrote;

This is after Genevieve Nnaji was interviewed by CNN’s Richard Quest, on her first movie as a director, which was bought by Netflix.

Lion Heart is Genevieve Nnaji’s directorial debut. A day before the premiere, Netflix announced a deal to acquire the movie. This makes Lion Heart the first original film from Nigeria to be owned by Netflix.

Genevieve Nnaji on CNN on discussed her movie specifically and Nollywood generally. She said she sees Nollywood gaining global acceptance in the nearest future but the only barrier she foresees is the language.

Watch a snippet from the CNN interview below.