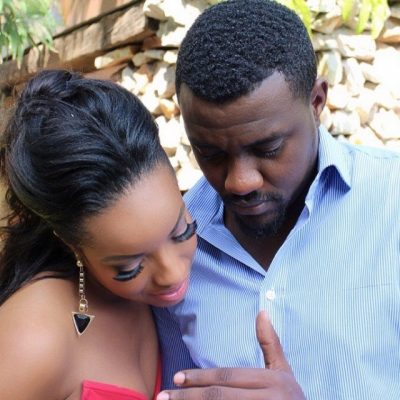 Ghanaian actress, Joselyn Dumas finally spoken about rumors that she once had a relationship with fellow actor, John Dumelo. The curvy actress in an interview with Abeiku Santana confessed that she once dated the actor, confirming the rumors which was widespread in the past.

The rumors kicked off when pictures of the two in romantic poses surfaced online. The both of them however made people believe they were just two celebrity friends, who admire each other because of the several couple roles they’ve played in movies.

Joselyn Dumas revealed that they were crazy in love at the time they were dating but they had to quit that relationship after 2 years. According to her they started dating after featuring in some movies.

“John and I dated for two years. We were both crazy characters and after featuring together in three movies, we decided to go out.”

She added that things didn’t go the way they anticipated when they started dating, so they had to separate. John Dumelo is now happily married. The wedding which took place on the 12th of May, 2018, in Ghana, paraded movie stars such as Ramsey Nouah, Nadia Buari, Yvonne Nelson, Jackie Appiah and many others.