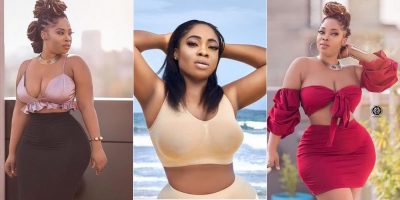 Ghanaian actress, Moesha Boduong has issued a warning to broke guys who might be fantasizing about approaching her for a relationship. Speaking with SVTV Africa, the curvy actress made it known that she cannot date a guy who doesn’t have a car and a place to live.

“My first boyfriend was a man without cash and we were struggling together but he cheated on me severally and got my heart broken. After such experience, I vowed never to date a broke guy.”

“I’m not a gold digger, not one little bit. I’m just ‘sick’ of this generation of guys, many of whom just can’t seem to get their act together. I don’t think it’s too much to ask for a dude who has a car, a job, and a place to live,” she added.

“I can’t date a man without a car, a man with at least a Corolla or a Hyundai isn’t bad for a guy who wants to date me,” she concluded.

Moesha Boduong came under intense criticism from fellow citizens after an interview she had with CNN’s Amanpour few months ago. In the interview, the actress stated that the economy in Ghana has made many women dependent on men for their upkeep. She further stated that she’s having sex with a guy because he can afford to take care of her financial needs.

Transcript of the interview below.

Moesha Boduong: In Ghana our economy is such that you just need someone to take care of you because you can’t make enough money as a woman here

Amanpour : Why because you can’t make enough money?

Moesha Boduong: You can’t make enough money as a woman here. Because if you want an apartment, you have to pay for two years in advance and i just started working…where will i get money to pay…

Amanpour: Are you basically telling me you are having sex with this guy essentially to pay your rent? (Shock in her eyes)

Moesha Boduong: Because he can afford to take care of me…

Moesha Boduong : He takes care of me, my financial stuff, my car, my rent, etc…