Home / Gist / “I Am Not A Bad Girl But I Can Appear Like Someone That Is Crazy”, Says, Actress Sotayo Sobola 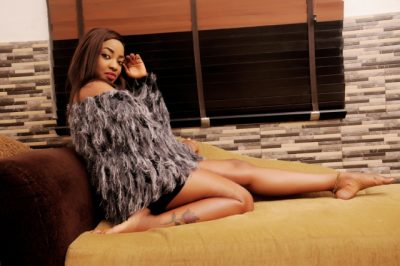 Nollywood Actress Tayo Sobola has admitted that she is aware that certain people think she is wild and a bad influence.

In an encounter with Sunday Scoop, she said she knew she could appear crazy but she was a calm person.

Sobola stated, “I can appear like someone that is crazy but my inner self speaks for me. People should stop judging a book by its cover. When you see a book, the right thing is to open it before making a conclusion.

“If you see crazy headlines about me, bloggers just want to attract readers to their blogs. When you open it, you will see something else. I am not a bad person.”

According to the new ambassador of Glee Hair, she is in love with coloured hair as she likes to try different things.

She stated, “I am not scared of doing new things. Coloured hair looks good on me most times, though I know it can make one look weird. But if you are bold enough as a man, I expect you to approach me even when I wear a coloured hair.

Speaking on the worth of her new endorsement, she said it was worth millions of naira and would last for a year.

“I cannot disclose the figure but it is worth millions of naira and it is valid for a year. When I was contacted to be a brand ambassador of the company, the CEO told me they settled for me because of my colourful personality.

“I have been seeing their products on social media and I like what I see. Apart from the money I got from the company, I admire the passion and determination of the CEO. I am a woman and a go-getter; so, I love it when I see hardworking women,” she said.