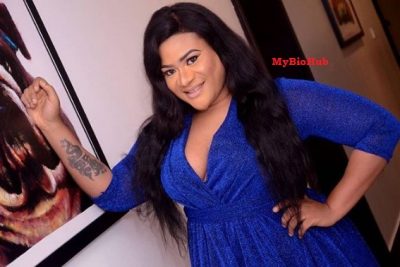 Curvaceous actress, Nkechi Blessing Sunday, is really having it good in her career at the moment. Her service is highly sought after as she is often on movie sets most days of the week. However, the actress told Sunday Scoop that she would turn her back on all that without thinking twice if her man asks her to do so.

Recently, the actress posted a picture of herself kissing a man whose face was not shown. She added the caption, “He popped the question and I said yes.”

However, when Sunday Scoop reached out to her, she cleared the air on the alleged proposal. She said, “The proposal was actually done on a movie set. It wasn’t real and I was just playing a role. The main thing is coming soon so wait till when my boyfriend pops the question to know how I would react.”

Describing how she will like to be proposed to, Nkechi said, “I wouldn’t want something done before a crowd. It has to be between my man and I, in a very romantic mood. And I will answer quietly; no noise.”

On the kind of man that rings her bell, the actress said, “He has to be a God-fearing man who is tall, dark and handsome. He should also be extremely nice and caring.

What if a man meets the above criteria but wants to take her as a second wife? Blessing said, “I would never settle for a married man. I am too much to settle for less. Why would I want another woman’s husband when I can get mine? It is what you want that you would tell God and I don’t pray for such.”

Sharing her thoughts on why marriages in Nollywood rarely stand the test of time, she said, “I think it’s because some of the people involved don’t have enough understanding. I usually tell people to try as much as possible to get married to their best friends. It is important that you get married to a man that trusts you because once there is trust, it is very likely that the marriage would last. If, for instance, the person I want to get married to says I must stop acting before we can become man and wife, then I would obviously have to discontinue the profession. I can stop acting for my man so as to secure my future.”

On whether she is comfortable with being a full-time housewife, the actress said, “I don’t want to be a housewife. There are many other things I can do and be extremely successful at, apart from acting. There are many people that don’t act but are always celebrated. I will surely get something else doing that would make me relevant.”