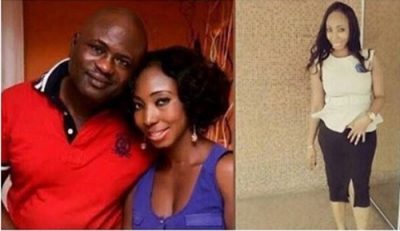 Lekan Shonde, a 53-year-old dockworker, who is facing trial for allegedly beating his wife, Ronke, a banker, to death, on Wednesday, told an Ikeja High Court that he did not kill his spouse.

He said his wife fell as a result of the slap and hit her head on the floor in the sitting room. Ronke’s lifeless body was discovered in their apartment on May 6, 2016 and Shonde was charged for alleged murder.

He was arraigned on October 24, 2017 by the Lagos State government. The prosecution alleged that Shonde committed the offence at 8:30p.m. on May 5, 2016 at his residence in Tiemo Street, Egbeda, Lagos. .

However, Shonde in his defense led by his counsel, Chief Robert Clarke (SAN), said his wife whom he was referring to as “Adunni” was sleeping on the couch in the sitting room with her phone while he was leaving home on that day of the incident. .

He told the court that he heard his wife speaking to one Kayode on the phone, a day to her death, telling him how sweet he made love to her. “I was furious when I heard her conversation and I slapped her from behind, she fell as a result of the slap and hit her head on the floor in the sitting room. .

She later got up and held me, saying she was sorry. When I woke up in the midnight, I met her still sleeping on the couch, and I asked why she was still there, she said she will join me later and I went back to the room. .

On that fateful day, I met her still sleeping on the couch in the morning with her phone and I dropped transport money for her as I usually do, and left for work. .

Around 4pm, my cousin came to my place of work and he told me that my father asked him to inform me of my wife’s death,” he said. The presiding judge, Justice Josephine Oyefeso, adjourned the case till November 30.