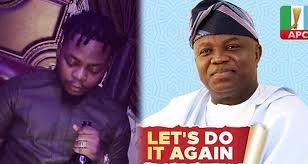 Rapper Olamide, Ambode’s adopted son has undoubtedly made it clear that he is rooting for the continuity of the current governor of Lagos state, Ambode. The rapper called on Ambode to go for an additional four term. “Four more my daddy”, he said as he shared a photo of the embattled governor.

Years ago, the rapper rallied round the governor during his campaign ahead of the governorship election against Peoples Democratic Party candidate, Jimi Agbaje. He also sang about Lagos and once disclosed that Governor Ambode picked him up and adopted him after the death of his father.

Meanwhile, the governor, is presently and seriously embattled and has been openly dumped by his party as a potential candidate for Lagos state governorship election. But the governor is optimistic that he will win Lagos All Progressive Congress’ governorship primaries that is scheduled to take place later today.