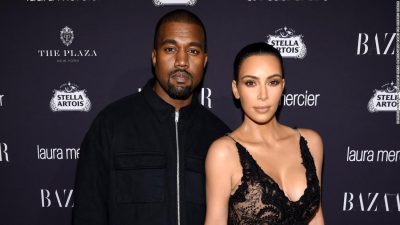 Kim Kardashian has opened up about how she felt about husband Kanye West singing about their marital drama on his new record, Ye.

West’s new album references everything from his mental illness and drug use to Tristan Thompson’s cheating scandal.He also revealed how Kim reacted to his comments calling slavery a choice on the song “Wouldn’t Leave,” rapping: “My wife callin’, screamin’, say, ‘We ’bout to lose it all!’ / Had to calm her down ’cause she couldn’t breathe / Told her she could leave me now, but she wouldn’t leave.”

“Did I cry about it? Did I fight about it? Yeah,” Kim candidly told ET at the 2018 CFDA Fashion Awards in New York City.

“That’s not stuff we put on social media — I’m not going to start tweeting what my thoughts are, but we have those moments and that was the one song that he didn’t really play for me until the last minute, so I heard that last minute and it meant a lot to me.

“I really like that song,” she continued. “But yeah, we have different views sometimes, but that’s my husband, you know?”

“I was in the room for making all of the songs and hearing things and it’s a really fascinating process, especially since he scrapped his whole album and redid it in the last two weeks and just came up with all new songs,” she said. “I left to go home for, like, two days and then I come back and it was a whole new album. It’s fascinating to see the process.”

“I’m so happy that it’s been well-received because I’ve seen him go through a lot and he’s just the most genuine person,” she added. “He might say things that might get misinterpreted and people don’t see the context behind it, but I always know his heart, so I’m glad that it was really well-received.”