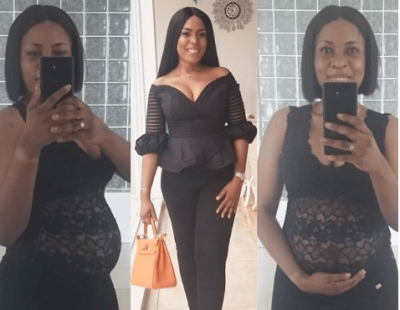 Nigerian celebrity blogger, Linda Ikeji who is set to have her son in Atlanta has confirmed that her baby daddy is from Delta state.

The confirmation was made in a new post she shared on Instagram. The photo Linda Ikeji shared came with the caption;

Mummy-to-be to a future Itsekiri big boy…Wish I were younger…would get pregnant every year for the next four years back to back! Lol. It’s been such an amazing experience so far. #Joy!

Since the millionaire blogger announced her engagement, a lot of people have been trying to figure out and find out who Linda Ikeji’s baby daddy, fiance or husband is. It was even speculated that the blogger had an IVF for the baby.Well, according to a user on the popular Nigerian forum Nairaland, Linda Ikeji’s baby daddy is Sholaye Jeremi, a close associate to Minister of State for Petroleum, Ibe Kachikwu.

According to the anonymous user identified by the moniker Nobody, Jeremi resides in Ikoyi, where Linda has her mansion. Pictures of Jeremi found on the internet shows he’s close pals with billionaire Femi Otedola.

“Linda Ikeji is pregnant for Sholaye Jeremi, a close associate to Minister of State for Petroleum, Ibe Kachikwu. He is from Sapele, Delta state. 100% confirmed. The funny thing is there was no engagement as Shola will not settle down although he is 40 plus.

Jeremi also stays in Ikoyi. Very credible, although Linda is trying to manage the situation but this information is 100 percent credible. You can do your findings as well, but thats the guy.”

Before this news broke, some people have even speculated that she was pregnant for popular media publicist Big Sam. And controversial journalist, Kemi Olunloyo, also alleged, Linda may not be really pregnant for anyone and what she is parading is simply a moonbump.

However in a new post about her extreme love for children and how she intends to be the best mother in the world, Linda Ikeji let it slip that the baby’s father is tall, dark and handsome!