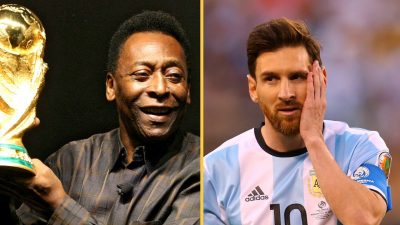 Brazil legend Pele has said Lionel Messi only has one skill, making him (Pele) far better. He also placed fellow Argentine Diego Maradona much better than the Barcelona talisman.

Having starred for the Liga heavyweights for well over a decade now, Messi is considered to have established a standing as an all-time great.

Pele, though, has suggested that the 31-year-old is one-dimensional and too reliant on his left foot to be compared to other iconic figures at the top of the world game. Pele told Folha de Sao Paulo:

“As far as I’m concerned, Maradona was one of the best players ever. If you ask me, ‘Was he better than Messi?’ Yes, he was. Much better.

While Pele may not be Messi’s biggest fan, there is no questioning his achievements since bursting onto the scene at Barca.

A remarkable tally of 567 club goals have been recorded in 653 appearances, with another 65 netted in 128 outings for his country.

International honours have proved elusive, though, having suffered final heartache at the World Cup and Copa America.