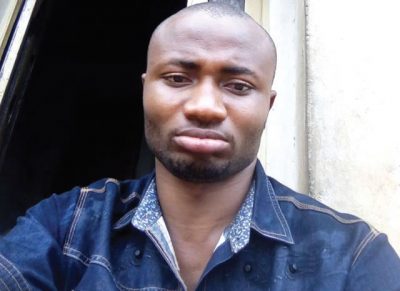 A couple in Awada, Idemili North Local Government Area of Anambra State, have lost their only child and breadwinner to a brutal attack by a thug in the community.

The suspect, Ifeanyi Ali, reportedly stabbed the deceased, 24-year-old Chigozie Alo, a tricycle rider, to death for refusing to give him N200.Saturday Punch learnt that the suspect had hitched a ride with Alo and on getting to his destination, demanded the sum from the rider to buy a local gin at a drinking joint in the area.

The Izza, Ebonyi State, indigene was said to have explained to Ali that he did not have money on him as he had just started work for the day.The victim, however, reportedly asked the suspect to buy the drink on credit, promising to pay the seller later in the day.

The 24-year-old wanted to zoom off when Ali reportedly stabbed him with a broken bottle from behind and fled the scene. The young man, it was gathered, bled to death.

The case was reported at the Okpoko Police Division after, which the suspect was arrested.

Alo’s parents, who spoke with Punch correspondent on Thursday, said he was planning to get married later this year before the incident happened.

His 58-year-old father, Jacob, said, “On May 13, 2018, he carried Ali to where he was going. When he got to where he was going, he asked my son to give him money to buy a drink at a joint. Chigozie told him he did not have money and promised to meet him at the bar to pay for the drink.

“But the man seized his tricycle key; held him from the back and stabbed him with a broken bottle. That was how he killed our only child. He was our only hope. We wanted to get him a wife this year. It was very painful.

“He had finished his secondary school education and was struggling to raise funds to further his education. Ali is a notorious criminal in this community; we want justice.”

The deceased’s mother, Elizabeth, could not hold her tears during a chat with Saturday Punch, lamenting that her decades of labour had ended in futility.

She said, “Even in death, the killer of my son must marry a wife to him, organise a proper burial for him \\sand cater to the wife.”

The victim’s uncle, Ndubuisi Igwe, said no amount of punishment meted out to the suspect could compensate for “the huge loss.”

He said, “Chigozie died before people could rush him to a hospital. The police are not handling the matter properly.”

A member of the family, who spoke on condition of anonymity, said Ali had been nursing a grudge against the deceased since he (Chigozie) warned him a few weeks ago to desist from criminal acts.

He said, “Ali had been engaging in criminal activities such as stealing and Chigozie warned him recently that such acts may mar his life if he did not desist.

“I learnt that he was arrested by policemen from the Okpoko division for an offence but was later released. He then went to attack and kill Chigozie.”

The Chairman, Human Rights Defenders, Nigeria, Mr. Dede Uzor, accused the Okpoko Police Division of foot-dragging and urged the state Commissioner of Police to wade into the case.

Uzor demanded that the case be immediately transferred to the State Criminal Investigation and Intelligence Department, Awka, for discreet investigation.

He said, “HRDN has been alerted by the family of the deceased to the despicable and gruesome murder of their only son, Chigozie Alo. The ugly incident took place on May 13, 2018, about 2pm.

“We have been told by the deceased’s family that police at Okpoko have engaged in ‘come-today-come-tomorrow strategy’ ostensibly to release the suspect on bail.

“We call on Anambra State Commissioner of Police to order the immediate transfer of the case file with the suspect to Awka for proper and unbiased prosecution to be handled by the DCP, SCIID.

“We also want the police to investigate the circumstances leading to his earlier release from the custody of Special Anti-Robbery Squad in Okpoko. We believe that our request will be judiciously looked into with the hope of bringing the suspect to justice.”

The state Police Public Relations Officer, Haruna Muhammed, said he would not comment on the incident on the telephone even when this reporter explained that he is based in Lagos.

He said, “If you want to know anything about the case, come down to the command. It is not a telephone issue. If you come, we will explain everything to you. I can’t give you any information because I have not seen you first-to-face. It is illegal to give you information now.”