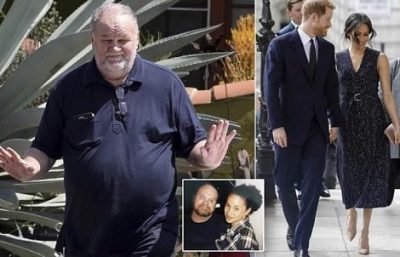 Meghan Markle’s father won’t attend her wedding to Prince Harry in three days’ time because he needs to have major heart surgery today, it has been claimed.

Thomas Markle, 73, who lives in Mexico, revealed that doctors will ‘go in and clear blockage, repair damage, and put a stent where it is needed’ during the operation, which will take place at 3.30pm UK time.Mr Markle is thought to have previously stayed at General Hospital in Rosarito, the town where he lives, but it is unclear where today’s operation will take place.

Free public healthcare is provided in Mexico, as opposed to the US where it is administered by private institutions.

The retired lighting director believes his heart attack was triggered by an open letter his son, Thomas Jr, wrote trying to convince Harry not to marry Meghan.

The revelation over surgery was the latest twist on a rollercoaster of speculation surrounding whether Mr Markle would attend Saturday’s royal wedding at Windsor Castle in Berkshire.

It came just hours after Meghan seemed to have convinced her father to change his mind and walk her down the aisle.