Home / Latest Updates / My Parents Wanted Me Dead Because I Was Born With 7 Teeth, Says Comedian Gordons 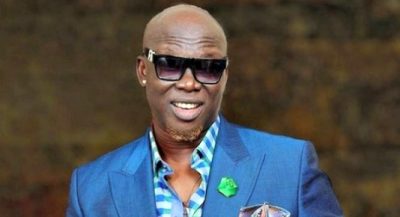 Godwin Komone, popularly known as Gordons is a comedian and musician. He is an Urhobo, from Delta State. His career started in 1992 and he has contributed so much to its growth. He talks to Tosin Clegg about his early years, family and career

I started comedy officially in 2005

And that was also the year I came to Lagos, but I had been doing comedy in Warri. I didn’t know I was going to be a professional comedian, as I started out as a musician. I was with a group and we were singing acapela music then but it wasn’t pure music, as it was musical comedy. So, a lot of people thought since I was doing comedy in the music I could separate both, and that was what I did. So, in 2005 when I came to Lagos, I decided to make it official and that was how the brand Gordons started. We did our music from 1992 to 2004, 2005 and it was a remarkable time which was my beginning. And it was what I was doing with comedy and music that brought about the brand, Gordons.

Acceptance was my major challenge while starting out

I felt I was not accepted and I didn’t know who to run to for mentorship. A lot of giants were in the game then and I didn’t know how to do my thing to have a breakthrough. So, I had a problem of people not giving me an opportunity, had a problem of being looked upon as a Christian person that won’t be able to function as a comedian in a circular setting and I didn’t have many friends. But thank God at the end of the day I was able to see Basketmouth who believed in me and gave me a platform called Laugh and Jams where I was able to express myself. And I have anchored ‘The Experience’ back-to-back five times. That was how it started.

Your foundation will always speak for you

I have been a Christian and church person all my life and everything I have done in this life is in the line of religion and church. And that was what influenced my act. Foundation is very powerful and if I wasn’t raised in the church my style of comedy would have been influenced by any kind of religion I was raised in. That’s why whenever I am on stage my foundation speaks for me as I have been a church boy all my life.

I’m the first born of my family, but I don’t know how many we are now. I have to call to find that out because my father is a very good producer even though he isn’t Don Jazzy. My parents are separated and they have their own husband and wife issues.

I have done a lot of shows in Nigeria

I did a show in Asaba with about 7,000 people in attendance and I did a show in Warri and I got 4,000 in attendance, Sapele had 3,000 and Port Harcourt had 2,000. I did a show in Lagos before and I brought Chaka Demus and Pliers but people didn’t pay attention to that. Now, they know Gordons is a bigger brand and I have started my own show as a matter of fact. But I will do my own show in Lagos, ‘Nothing But The Truth’ on December 25, 2018. And it’s a one-man show. I don’t want to do a show if I don’t have a joke to crack. I feel its time and I don’t want to do a show because people are doing theirs, but I want to have a conviction for it.

We had a Glo event in Accra and on that very day, Flavour, Tekno, myself and some artistes band members were together. We took off from Murtala Mohammed International Airport and eight minutes into the flight the pilot announced that the plane wasn’t moving well and I knew something was wrong but I wasn’t too sure. I have been on several flights and I know how a good flight should go so I was very disturbed. Between my thoughts, the pilot made an announcement that the plane was faulty and that we had to go back. It wasn’t funny and nobody was able to explain how anybody felt at that moment as reality will hit you and something would be telling you this might be it. So we started putting our lives together within us and we started asking for God’s forgiveness. As a matter of fact, somebody was advising me on the plane and how he transferred from advice to cry

God has been very wonderful to me

He has pushed me beyond my limit and blessed me beyond my imagination. Secondly, humility and the fear of God have kept me. It’s possible to be humble and to also place God factor in all we do. I still feel within me that I’m still starting.

And I also started my own transportation company and if I wasn’t doing all of this I would have been a Pastor. I love God and the things of God. And I feel deep down inside of me God wants me to do that and if he gives me an opportunity, believe me, I will. I’m into many things that people won’t believe as it’s believed you need to have at least four streams of income running through your life for you to have Eden on earth.

Nigeria will make you have compassion for people

In this country, we go through a lot as we provide the basic amenities for ourselves. We provide everything for ourselves and it’s a lot of pressure. But as Nigerians, we go through a lot and I felt I should contribute my quota by providing humour to help to augment people who are hurting and going through stress. In my career, I have heard a lot of testimonies before and how my materials have saved people.

How I made myself exceptional

When I came into the industry, I noticed everyone wanted to have a funny name, but I decided to bear my real name. After that, I introduced music and education which makes you learn something during the show and this makes me unique.

I have done what God wanted me to do and it has won people to God. I anchored ‘The Experience’ for five years from the first to the fifth one.
I have done shows for every president during my career except for Buhari. I have done shows for governors, done shows for the biggest weddings within and outside Africa and graced every big show that has anything to do with comedy in Africa. I did shows to a point that I became a Glo Ambassador, Bill and Melinda Gates Ambassador, and being around from 2005 to now has been through God’s mercy.

My growing up makes me emotional and depressed

I was a child that wasn’t loved, as I didn’t receive any love from my parents at all. At some point, I was a sacrilege to them as I was born with seven teeth in my mouth, and some people said it was a mark of God, while others said it was a taboo. So I was treated like a curse and a sin right from the beginning. It was difficult, as they wanted to kill me, but thank God for some people who said they shouldn’t as they didn’t know my destiny. Growing up was hell but we used the pain we grew up with in the past to do what we have done today so that those going through things would have hope no matter what they are going through.