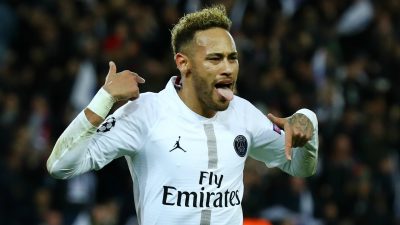 Paris Saint-Germain striker, Neymar, has now become the highest-scoring Brazilian in Champions League history after scoring his 31st goal in the competition. The former Barcelona star achieved the landmark in the 36th minute for Paris Saint-Germain against Liverpool at Parc des Princes on Wednesday night.

The 26-year-old had drawn level with the previous 30 goals record set by AC Milan legend Kaka last month when he scored a hat-trick in PSG’s 6-1 demolition of Red Star Belgrade in Serbia. That goals also saw the Brazilian footballer become the 20th player to reach 30 goals in Europe’s premier club competition.