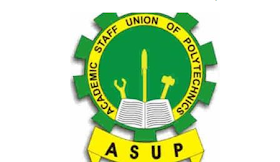 The Academic Staff Union of Polytechnics (ASUP) has begun an indefinite strike over what it described as consistent failure on the part of the Federal Government to implement agreements it willingly signed with the union since 2010.

Addressing a news conference in Abuja yesterday, ASUP National President Usman Dutse said since 2010 when the agreement was signed, they have consistently engaged with the government leading to the signing of several memorandums.

But, he alleged that the government has failed to implement the agreement.

Dutse said the issues in contention include: conditions of service for members of the union; review of obsolete legal regimes and other policy documents, which serve as governing instruments in the sector; nonexistence/ deplorable state of the existing facilities, including classrooms, libraries, students’ hostels, laboratories, workshops, studios and office accommodation.

Others include: discriminatory policies against the sector and its products, victimisation of union leaders and non-payment of members’ salaries in several states.

He said the union has been left with no other option than the painful path of embarking on an indefinite strike in its bid to save the sector from collapse.