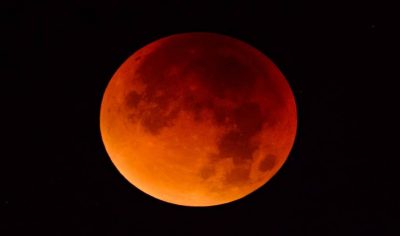 The eclipse which would make the atmosphere look darker as against the usual clear white colour of the moon would take place between 6:44pm to 9:21pm

A ‘blood moon’ happens when Earth’s moon is in full eclipse and has no special astronomical significance, rather, the view in the sky is striking as the usually whitish moon becomes red or ruddy-brown and can be looked at with the naked eye.

“The Eclipse in Nigeria will start around 6:44pm as partial eclipse and developed into a total eclipse around 7:30pm.

The Eclipse is expected to reach its peak around 9:21pm and wane from then until the eclipse ends around 12:30am of the 28th of July 2018.

“The total Eclipse will last for about 1 hour and 43 minutes, making it the longest total Lunar Eclipse of the 21st century.

No other Lunar Eclipse will be as long as this in the century.

Also, on July 27, Mars will pass closer to Earth than it has done for 15 years.

The phenomenon, known as perihelic opposition, will make the red planet appear larger and brighter than normal in the night sky.

The rare event occurs when Mars reaches its closest point to the sun as the same time as Earth’s orbit brings it directly between the two.

Although the actual point of opposition will take place on July 27, Mars will be noticeably larger for the majority of the month of July.