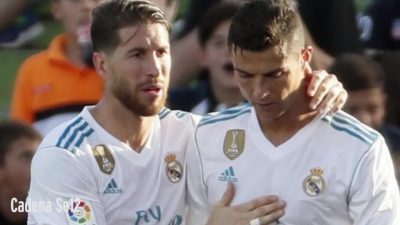 Sergio Ramos has given his opinion concerning a statement by his former Real Madrid teammate, Cristiano Ronaldo, who recently moved to Serie A side, Juventus

Shortly after making the £88 million move, Ronaldo was quoted speaking about Juventus: “It’s the biggest club in Italy and one of the best clubs in the world, so it was an easy decision, its different her, it’s like a family”.

Sergio Ramos is believed to have hit back with the Spaniard stating that he has no worries about the future of Los Blancos without the Portuguese talisman. Sergio Ramos said:

“Here we have always felt like a family, so I don’t know what he was talking about”. “We had lots of success, which is because we are a family and he was part of that family, which we have continued to have”. “Its obviously a negative when you lose a player like Cristiano Ronaldo, but we can continue to win and in Real Madrid’s history many have come and gone. But Real Madrid continues to win”. “No one is above Real Madrid, whatever happens Real Madrid will continue to live on and it was his choice to leave”. “The decisions are not mine to make, but the doors are always open to those that want to be part of Real Madrid”. “Losing Ronaldo was hard, but no player is above Real Madrid and we still have the hunger to improve and win more titles”. “The mindset we have is more important than any individual in the team”.