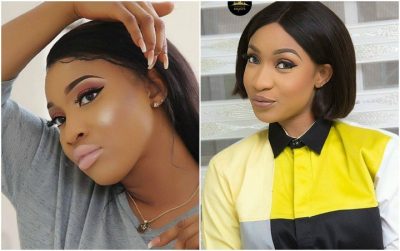 Controversial Nollywood actress, Tonto Dikeh has spoken concerning the war of words between Kemi Olunloyo and Linda Ikeji over the latter’s pregnancy.

Kemi Olunloyo had on her Instagram accused Linda of wearing a prosthetic bump after she made a lengthy emotional post, chronicling her journey and her excitement when she found out she was pregnant.

She said Ikeji was neither engaged nor pregnant.

However, Linda in a post addressing Kemi Olunoyo’s claims, queried why someone who she helped while in prison could utter false claims about her pregnancy.

Speaking on the recent face off, Tonto urged Kemi Olunloyo to use her motherly instinct, focus on making her life better and leave Linda alone.

Tonto took to her Instagram page supporting Ikeji, stating that she remained a role model to many people no matter the criticisms concerning her pregnancy.

She wrote; “All this negativity is the reason I Jejely went extremely private /personal during my pregnancy.. Not even my parents knew until I was 8months and far away from the world negativity and hate.

“Carrying a baby is a very complicated process let alone carrying a baby with so much hate and negativity..
Let this lady breathe,She may not deserve your pity on tongue lashing but her baby sure deserves safety.Let them have one.

“Worry more about your lives and how to push you forward.. Regardless Linda is a success whether fake bump or real bump,She will always remain a role model to millions even if it’s not to you.

“Someone needs her,Her baby and they folk she mentors needs her. so those of you who don’t need her leave her alone..

“Children are a gift to mankind, Aunty Kemi I would really love to say a few things to you but nah I don’t want to come across as rude As I do not have a rude bone in me for you.

“I will let sleeping dogs lie.But please draw from your motherly instinct and follow this with caution Ma..
@officiallindaikeji I am with you in prayers and as a woman I stand wit you.

“Do have and enjoy the best pregnancy You can. Sad and bitter women leave your fellow woman alone. Women another woman isn’t your problem. God heal you all of all this Hurt and hatred.

“Because you sin differently don’t make you right. THE REASON SOME WOMAN WILL ALWAYS BE UNDER AND NEVER REACH GREATNESS IS HATE, ENVY AND LACK OF JOY FOR THE NEXT WOMAN.

“By the way, Linda I hope you know your BEST friends are behind all the faceless nameless account trolling your pregnancy? ‘STAY WOKE’.”