Home / Gist / “Now I Know You Can’t Have All You Want”, Says Linda Ikeji 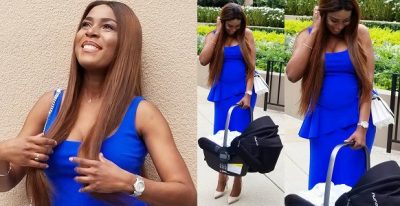 38 years old single mother of one, Linda Ikeji who is known for her successful career and independence after accruing mass wealth after a period of time and experience in the media industry has admitted in a social media post that one can never actually have all that one wants

According to the rich and unarguably successful blogger who said this after recently after being called out on many occasions for joining the league of unmarried mothers popularly known as “Baby mamas”, now she knows that you can’t have all you want in life and it is nobody’s fault.

Despite the publicity of engagement, report from many corners has shown that the blogger is not engaged neither is her baby daddy ready to marry her.

Oprah Winfrey said ‘You can have everything you want, but not at once’…and I agree. If God gave you every single thing you wanted all at once, will you even remember Him anymore? Will you continue to seek Him? So sometimes I think he just holds some things back from us so we know He’s God. It doesn’t mean He won’t give it to you, it just means He’s not ready to give it to you yet.

That’s why you see everybody pursuing one thing or the other…lol. If it’s not success, its career; If it’s not money, it’s a good job, if it’s not husband/wife, it’s a child; if it’s not pain, it’s an illness. We are all in pursuit of happiness and I think God made it so!

But here’s what you should remember. That He hasnt given it to you yet doesnt mean he won’t. God’s timing is different from ours. We just all need to have the patience to wait on His timing instead of forcing our own.
.
No matter what you do, never give up on God and remember that once you seek him, He will never leave your side. He’s watching and when he feels the time is right, He will give you some of what you seek…and some more. 😊. Have an amazing day! 😘