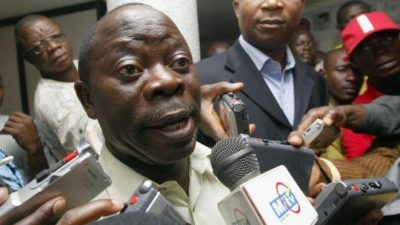 The National chairman of the All Progressives Congress (APC), Adams Oshiomhole, has fired back at former Ex-president Goodluck Jonathan for saying he is under enormous stress and in a fragile psychological state.

Jonathan made the statement through his media aide, Ikechuwku Eze, while reacting to Oshiomhole’s claim that his administration started vote buying.

Reacting through his chief Press Secretary, Simon Ebegbulem, Oshiomhole said Jonathan is a zoologist from the swamps of Otueke who ran a disastrous presidency.

“If the allegation that the APC national chairman is having psychological issues with the even more specific reference to “multiple personality syndrome,” came from a doctor of human medicine with specialisation in psychology, it could debatably enjoy some merit. But Jonathan is a zoologist from the swamps of Otuoke. This is clearly veering from his turf and unworthy of further debate.

”Probably still retaining some remnant of conscience after a disastrous presidency, he was stung when APC national chairman recently correctly accused him specifically and his party of birthing vote-buying and encouraging electoral fraud in Nigeria.

”After unseemly name-calling, the former President without even addressing the core points raised by Oshiomhole felt the easier path was to counter-accuse the APC leader with exactly the same damning allegation.” Ebegbulem said.