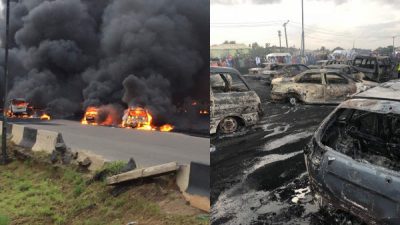 The Lagos State Police Command has arrested owner of the truck conveying the 33,000 fuel tanker that exploded last month on Otedola bridge in Lagos.

Recall that nine persons were burnt to death and several vehicles burnt.

Since the incident occurred, the Police have been on the trail of owner of the truck until he was apprehended by detectives of the Homicide section of the State Criminal Investigation and Intelligence Department, SCIID, Yaba.

”The truck with registration number NSR 888 YQ, driven by a yet to be identified suspect, laden with petroleum product, lost control, spilling its content and went up in flame, burning 56 vehicles and killing 9 unidentified persons.

“The CP assures that the Command will do all it can to help families who lost their beloved ones in the accident, find a closure by ensuring that anyone found culpable is brought to book.

“DNA test to ascertain the true identities of the charred remains of the victims is ongoing. Further development will be communicated to Lagosians”.