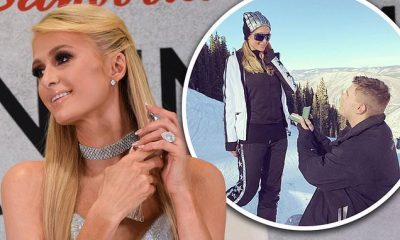 He proposed to her with a $2m diamond ring when he got down on bended knee in Aspen.But now TMZ is claiming that Chris Zylka wants the 20-carat sparkler back after Paris Hilton, 37, called things off between them – as she still has it in her possession.

The site reports that Chris, 33, did get a big discount on the engagement ring as the jeweller and Paris have a close relationship.

They write: ‘Under Californian law, if she calls off the engagement, he gets the ring back.

‘He hasn’t asked for it back yet, but he will ask if she doesn’t get the hint.’

Back in March, Paris accidentally lost her ring while dancing to a set from British DJs Above & Beyond.

The ring flew off her finger as she grooved at the 7,000 capacity gig at the RC Cola Plant, sparking a frantic search of the VIP area.

Miraculously, the pear-shaped sparkler was later found in an ice bucket two tables down.