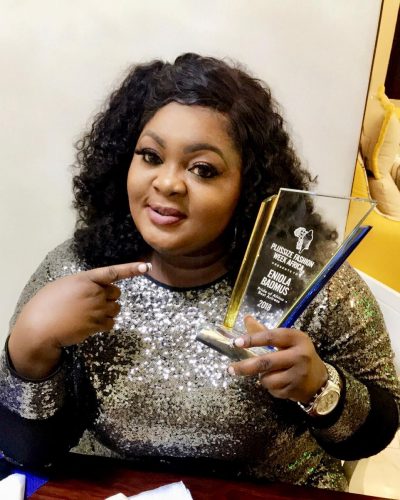 The multiple award winning actress, film producer,and brand influencer took to her IG to proudly show off her award, saying:“PROUD OF MYSELF………..SENATOR BADOSKYYY This is for you my #BaddyGang and #BadmusSoldiers”

“BIG SHOUTOUT TO @pfwafrica FOR THIS AWARD…. PRIDE OF AFRICA BEST ACTRESS THIS IS SO HUGE IN MY SIGHT I REALLY REALLY APPRECIATE IT…….BEING A PLUS-SIZE NO BE SICKNESS JUST EMBRACE YOURSELF ������”, she also said.
Eniola Badmus, is a Nigerian film actress. She came into limelight in year 2008 after she featured in the TV series, Jenifa.
See how she walked the runway while receiving her award