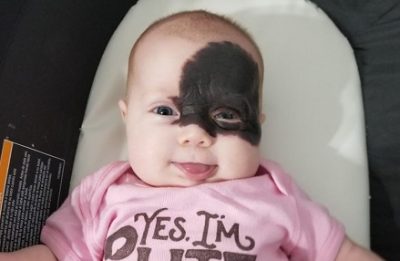 A baby was born with a birthmark covering a third of her face which made her look like the superhero Batman, her stunned parents say.

Andrew, 34, and Lacey Jackson, 35, were shocked when Natalie arrived with the huge mask-like mark on part of her forehead, nose and around her left eye.

The parents told how they were “filled with panic” when a nurse lifted the newborn up after she was delivered via Caesarean section on January 9 this year.Mrs Jackson said doctors believe Natalie’s birthmark will continue to grow and she will face health risks, and the couple have worried that she could face cruel treatment as she grows older.

The mum said of the delivery: “Hearing her first cry was so special. Then the nurse lifted our girl up, after my C-section, and I saw the big black mark on the left-hand side of her face.

“She was so beautiful, but it looked like a bruise and I was worried in case it was something I had done to her during my pregnancy.

“Medics said it was just a birthmark, though, and she was breathing and healthy.”

As Mrs Jackson cradled her newborn, born weighing 7lb 1oz, she began to fear what other people would think of the mark.
The couple have two older children – Elliott, who is seven, and four-year-old Devin. And after the youngsters met their baby sister for the first time, they came up with her superhero nickname.
Mrs Jackson said: “One of the boys asked, ‘What’s that on her face, mummy? What’s the black mark?’ I told him it was her superhero mask. I told them that, because of it, she could achieve anything.

“People tell us how amazing her birthmark is and how gorgeous she is and we couldn’t agree more.

“We’ll always tell her it’s a part of who she is and who she is supposed to be. People will always know how special she is with her birthmark and how amazing she is inside and out.” 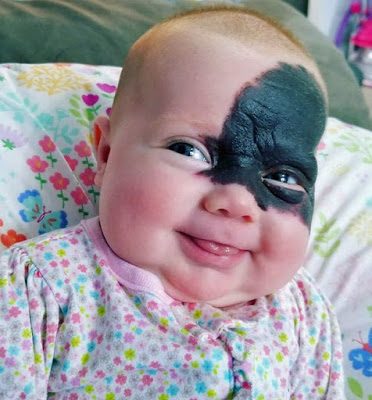 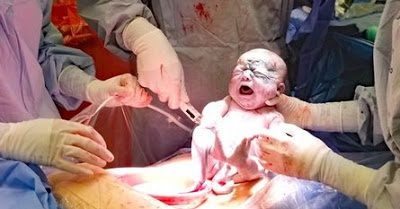 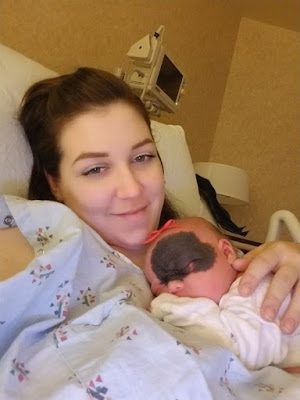