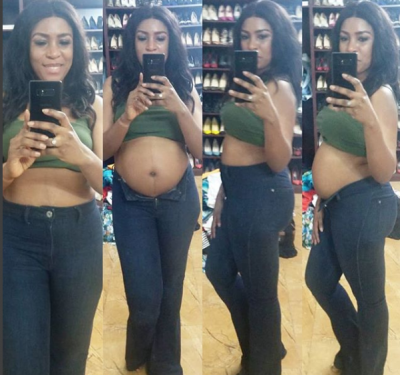 Celebrity blogger and former model, Linda Ikeji has shared uncovered baby bump pictures to prove that her pregnancy is not fake. This is in response to controversial blogger, Kemi Olunloyo, who said the pregnancy is not real and that the one she’s flaunting is due to prosthetic baby bump she is wearing.

”(How to hide a baby bump 101. Suck belle in and wear a high waist…lol). So, a few friends have been calling me, asking me how I’m holding up with all the trolling on the internet since I announced my pregnancy. I kind of felt bad for them because they were worrying over something I wasn’t. I’ve been on the internet for nearly 12 years now, I’ve made money, I’ve met amazing people, I’ve written about folks and stepped on toes (mostly of course, unknowingly…lol). So when people troll me, that’s fine. It’s called Karma. Lol. Fortunately it doesn’t get to me. There’s nothing I haven’t been called on the internet, and it will never stop because this is where I plan to do business for the rest of my life! So we all are stuck together. I’m not going anywhere…lol.” 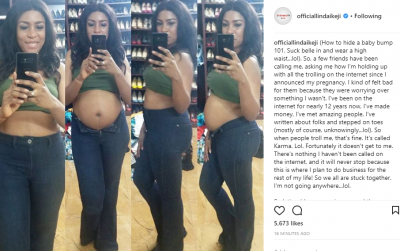 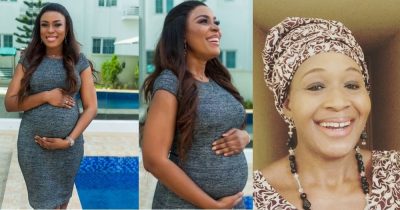 Linda Ikeji also had the below prayers for those who believed her without any doubt when she broke the news of her pregnancy.

”So here’s my prayer for you! That God will bless you so much, people won’t believe it and will question the sanity of those who do…because the blessing is so enormous, no one thought it was possible.

I wish you the kind of miracle that will leave people arguing if it’s true or not…because to them it’s just not possible – but then they forget that with God, nothing is impossible.

I pray that when your blessings come, people will be like ”it’s a lie jor!’ ‘How can?’ How come?” because no one saw it coming. I pray that God answers all your prayers and fulfills his promises to you. I hope he blesses you so much, even you can’t believe it! 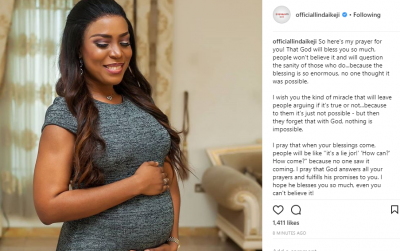 Love you guys so much because you changed my life. I’ve never been happier than I am right now!
And don’t forget guys, LITV launches June 1st.
Massive hug and plenty kisses.”