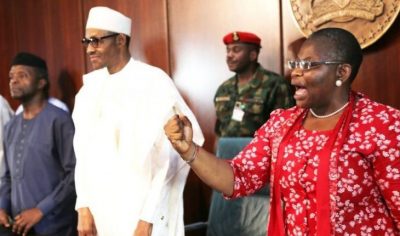 The presidential candidate of the Allied Congress Party of Nigeria, Dr. Oby Ezekwesili, has lamented the killing of soldiers fighting Boko Haram insurgency in the North East, saying the incident does not speak well of the country’s internal security apparatus.
She also commiserated with families of the deceased, while expressing wonder at why it took the military about a week to confirm the incident.

Ezekwesili in a statement on Sunday challenged the military authorities and the Commander-in-Chief, President Muhammadu Buhari, to prove that they haven’t failed the nation’s soldiers.

While commiserating with families of the deceased, she suggested that the fallen soldiers must not be deprived of their honour.

According to her, many questions were begging for answers with the recent killings of soldiers.

She asked the Muhammadu Buhari-led Federal Government to “publish the names and authentic figures of fallen soldiers for Nigerians to know the extent of damage and for record purposes.”

Ezekwesili said, “There are pertinent questions that the Federal Government and the military need to answer.

“How did this latest in a series of killing of our soldiers in front line of battle catch our country off-guard?

“Don’t we think the official line that the Presidency and military have been pushing on the state of the terrorism war is endangering our soldiers and nation?

“Can the government be more honest on the challenges it appears to be facing in prosecuting the war?

“It is no longer acceptable for our heroes to die and not be accorded the honour of gallantry.

“The FG and the military must accord full military burial rites to the fallen soldiers and also publish the list of others who have died and had been buried discretely in recent times without giving the Nigerian people the opportunity to celebrate their gallantry.

“The Federal Government should immediately take measures to protect and preserve our soldiers, military establishments, our people and territory to avoid further deaths.

“It is time for a review of current operational strategy being used to prosecute the war. It is also high time that our Intel (intelligence unit) was revamped.

“The Federal Government must take measures to assess the failure of leadership of the Service Chiefs — as performance, accountability and consequence have been missing for far too long and must now change.”

She subsequently advised the military to improve on its intelligent gathering, saying that would be key to defeating the Boko Haram insurgency.