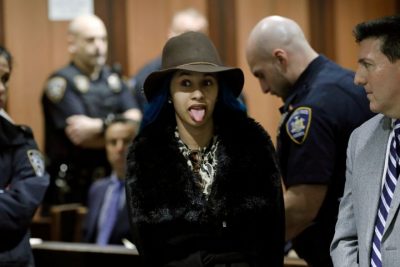 Four days after Cardi B faced a possible arrest warrant for skipping a court date stemming from a misdemeanor assault charge, the rapper appeared at a New York court Friday where she was ordered to avoid contact with the two strip club employees involved in the incident.
“Defendant Belcalis Almanzar aka #CardiB has been arraigned in #Queens Criminal Court,” Queens, New York district attorney Richard A. Brown tweeted. “My office requested $2,500 bail, but she was released on her own recognizance. The next court date is Jan. 31. Orders of protection were issued.”

The misdemeanor reckless endangerment and assault stem from an August incident at Queens, New York’s Angels Strip Club, where Migos – including Cardi B’s now-former husband Offset were scheduled to perform.

According to two female bartenders at the venue, Cardi B ordered her posse to attack the women, one of whom was rumored to have have sex with Offset. The rapper’s crew allegedly threw bottles, chairs and a hookah at the bartenders, resulting in serious injuries, TMZ reported in August.