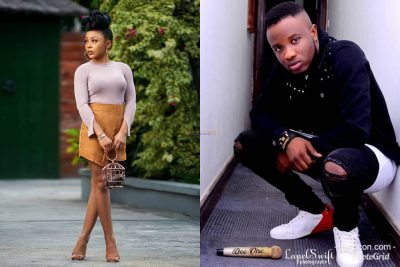 The fight between two former Big Brother Housemates, Comedian Deeone and Ifuennada finally came to an end, after the comedian posted a photo of Ifuennada holding her products with the caption:

‘No matter the misunderstanding you still remain my friend, let bygone be bygone 😂 you can now call me 😘 #LetLoveLead #ByTheWayYourProductsAreAmazing’

And ifuennada in responding to the post, took to her IG handle to make a video saying she has also forgiven Deeone. She then begged her fans to forgive him as well and stomp his upcoming show in Abuja.

Meanwhile Deeone’s fans took to his comment section to shade the comedian, some saying that it was after all scripted and a cheap publicity stunt to garner more followers, another said Deeone is looking for fame, as he has totally been forgotten by Nigerians.

My final thoughts on @comediandeeone — — I'm not very happy tonight…please try to leave only positive comments. — — To all my Naturalistas, I have a video on how I made my twist using my @beautifuennada products. — — Someone will win 5k tonight on my next post. — — #LetLoveLead #Stew #IfuEnnada #beautIFUEnnada