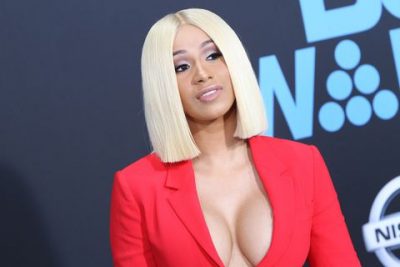 Famous drama queen and rapper, Cardi B has been left injured after trying to fight Nicki Minaj at New York Fashion Week Party On Friday night, the rappers got into an altercation at the Harper’s Bazaar party, a source confirms to PEOPLE. The bash was part of the festivities for New York Fashion Week.

Video of the incident was posted on social media and Cardi B can be seen making a lunge towards someone, though it is not entirely clear if its the “Barbie Dreams” rapper.
An insider tells PEOPLE that Cardi arrived at the event first.
After Nicki showed up, there was an “altercation” on the second-floor balcony during a Christina Aguilera performance.

Reacting to the drama on her Instagram page, Cardi b wrote; As per the injury which appears to be a knot, Cardi’s team allege that she bumped her head on something in the middle of the fracas and if it were Nicki Minaj who hit her, it could have been a black eye instead